It has been sitting collecting dust. The last time it was used was over a year or two ago on this bridge in a much different configuration. Edit: just remembered we used it on another project after this one, but its use was similar to the Boutte except at ground level with the robot riding on a barrier squeezed between the roadway and concrete sound walls where we could not get.

It worked very well on that bridge, but for many reasons I have my doubts that it will ever be used again. If it is needed it is still around. I have moved on to many other things that have drawn my interest. I probably have about 5 or 6 odd projects like this going on right now in various states of completion. I tend to work on them a bit at time or whenever the need arises, so progress is slow. Here is one of the less interesting projects that shares some similarities with the railbot.
Trackbot.jpg
The railbot had another simple 4 wheel configuration for ground work that you may have seen in the beginning of this thread, but it was only two wheel drive and lacked the maneuverability and traction needed for many areas. This MMP-30 trackbot from machine lab can spin on a dime and climb stairs if you are careful. https://www.themachinelab.com/products/ ... %2030.html I spent a good bit of time waterproofing it for scanning culverts with shallow water levels (have a video driving it in a pool somewhere). I also installed a pixhawk type flight controller (ArduRover) and a raspberry pi companion computer. The mount in the center is a quick release for a Faro scanner, but my intentions where to make this a multipurpose platform for a variety of things. It would be simple enough to mount a better GPS or a 360 prism for topo work in grassy fields. I was planning on mounting a Schonstedt Magnetic Locator on it one day and recording the audio output to the pi then using the audio time stamp and the pixhawk mission logs timestamp to produce a map of magnetic intensity and such if you follow. It could be used for a variety of things like pulling a GPR unit or other ground penetrating tech. I managed to get it working with a wireless gamepad routed through the pixhawk's mavlink, but even after tweaking a bunch of settings to reduce latency the performance was poor forcing me back to RC controls. I also got a decent fpv system setup using gstreamer through the pi and pi camera over wifi, but it is far from the performance I am accustomed to after being spoiled by the DJI goggles and drone camera systems.
Currently it can be used with the scanner mounted on it for basic terrestrial scanning (not mobile mapping), but I have plans to figure out how to trigger a scan from the pixhawk so that I can plan more automated mapping missions. It is possible to plan missions with it, but the scans still have to be triggered manually over wifi for now. Seems like it would be possible to use Mission planners normal commands to plan out waypoints with pause periods and camera trigger output to start the scan perhaps through the pi or using can bus directly into the scanner. I might also add either some obstacle avoidance sensors (sonar or lidar) or the Intel RealSense D455 avoidance and better indoor navigation. If I do get it better setup for scanning I think it will eventually need a more complicated mount that will raise the scanner to a more suitable height then lower it before continuing the mission. I will figure it out in time...just have to finish some other more interesting projects first.
This is obviously not the first time a scanner has been mounted on a tracked robot and it is a rudimentary attempt at best when you compare it to most of the work that was put into service many years ago by much smarter people. After seeing the amazing work put into pairing up many different scanners and Spot I question whether or not I should even continue this project. I doubt I will have a Spot anytime soon and even if I did I would probably not put it in the hazardous places I intend to put this one. At the combined price of all the components, aside from the scanner, this could be considered a more disposable option, or at least a much simpler and lower priced entry point for others wanting to get into scanning with robots. Right or wrong at least I have been having some fun learning a thing or two in the process

You do not have the required permissions to view the files attached to this post.
Top

This caught my attention last October... 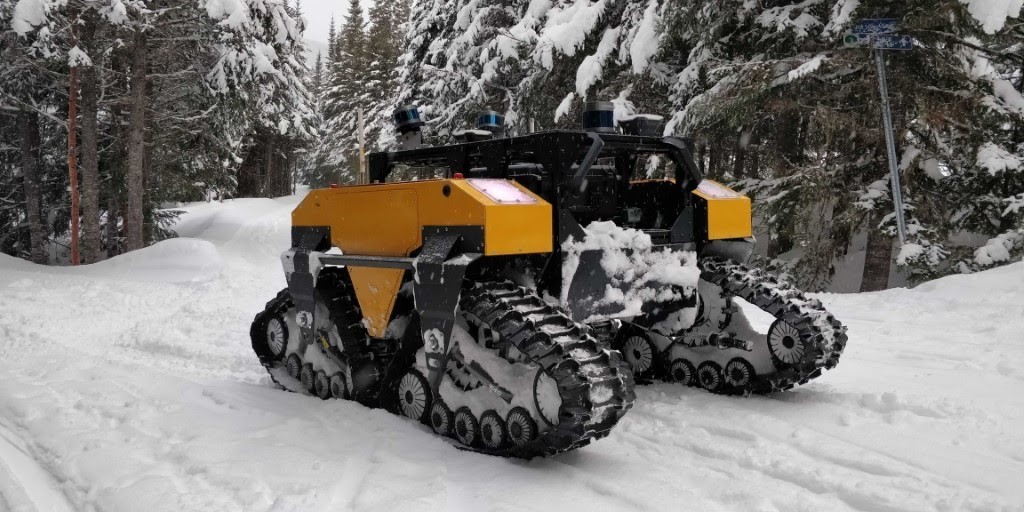 A team from Northern Robotics Laboratory (Norlab) at Laval University in Quebec - who recently won best paper at this year's computer and robot vision conference - is pushing robotic navigation to its absolute limits: autonomous navigation in the snow! The team has recruited a Warthog UGV to help with developing and testing navigation algorithms designed for unstructured terrains in challenging dynamic winter conditions. Their robot is equipped with a variety of sensors including several Robosense LiDARs, an Xsens IMU, GNSS and a dedicated computer. Find out why they chose Warthog UGV and how it has helped them overcome some of unique challenges in their research.

Awesome! I need that kind of funding

Looks that thing would make a good platform for search and rescue during blizzards. I don't have much experience with lidar in the snow, so I have to wonder how well those robosense units would perform in white-out conditions? From the looks of it those guys probably know.
Top
Post Reply
43 posts